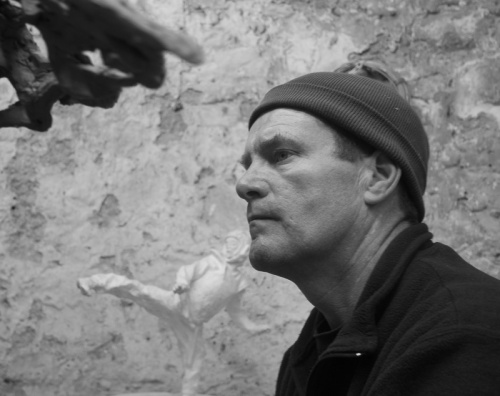 He attended Maidstone College of Art from 1979 to 1982, where he attained his degree in sculpture. He set up a mould making, casting and restoration business in South London. This operated for 5 years.

He moved to Merseyside in 1991 and worked from a Liverpool city centre studio, and was a part time lecturer at Bolton Institute in Fine Art and Sculpture. He later moved to North Wales in 2002 with his wife and two children. He now works from his studio home in Cilcain.

I have been practising sculpture since I was 14 and landed my first commission at 16 for the Equitable Life Assurance Company, London.

Over the next 36 years unsurprisingly I have done a lot of different stuff which I will put on this website when it becomes relevant – however, I would prefer to start with what I am doing or seeking to do now.

This quote from Albert Einstein summarises my feelings about art:

“Where the world ceases to be the scene of our personal hopes and wishes, where we face it as free beings admiring, asking and observing, there we enter the realm of Art and Science; if what is seen and experienced is portrayed in the language of logic, we are engaged in Science.

If it is communicated through forms whose connections are not accessible to the conscious mind but are recognised intuitively as meaningful, then we are engaged in Art. Common to both is the loving devotion to that which transcends personal concerns and volition.”

Below is a slideshow featuring Nick at work in his studio.

One response to “About Nick Eames”